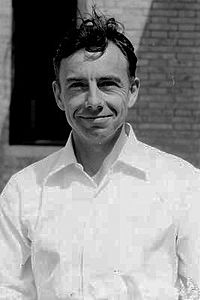 Jean-Louis Koszul (French: [kɔzyl]; January 3, 1921 – January 12, 2018) was a French mathematician. He was born in Strasbourg, France. Koszul was best known for studying geometry and discovering the Koszul complex. From 1980 until his death, Koszul was a member of the French Academy of Sciences.

All content from Kiddle encyclopedia articles (including the article images and facts) can be freely used under Attribution-ShareAlike license, unless stated otherwise. Cite this article:
Jean-Louis Koszul Facts for Kids. Kiddle Encyclopedia.