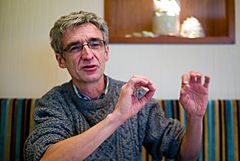 Jean-Marie Hullot (16 February 1954 – 17 June 2019) was a French computer scientist and programmer. He authored important programs for the original Macintosh, NeXTSTEP and Mac OS X platforms. These include the SOS Interface for the Mac, which later became Interface Builder for NeXTSTEP (1985) and later into an important part of Mac OS X. He also led the iCal and iSync development teams for Mac OS X (2002). He worked as CTO of Application Division at Apple Inc. from 2001 to 2005. He was also the President and CEO of Fotopedia, a photo encyclopaedia.

All content from Kiddle encyclopedia articles (including the article images and facts) can be freely used under Attribution-ShareAlike license, unless stated otherwise. Cite this article:
Jean-Marie Hullot Facts for Kids. Kiddle Encyclopedia.