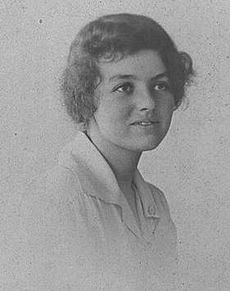 Jean Curlewis in her twenties

Jean Curlewis (7 February 1898 – 28 March 1930) was an Australian author. The daughter of Ethel Turner and Herbert Curlewis, she battled tuberculosis for many years before dying at only 32 years of age.

Ethel Jean Sophia Curlewis was born at Mosman and educated at Sydney Church of England Girls' Grammar School, Jean Curlewis grew up in a cultured and literate upper-middle-class family. Her mother was Ethel Turner, the popular author of Seven Little Australians. Her father was Herbert Curlewis, a lawyer. Jean attended Killarney, the Church of England Grammar School in Mosman where the Curlewises lived, and later went to S.C.E.G.G.S. Darlinghurst. There is little doubt that the close bond between mother and daughter, the cultured lifestyle of her parents and the society in which she was raised helped Jean to develop into a highly literate, socially aware and articulate young woman. Because Jean was genuinely concerned with issues of social welfare it is not surprising to learn that she served as a Voluntary Aid, relieving overworked nurses during the Spanish 'flu epidemic that devastated Sydney in 1919. It is likely that this period, when she was particularly open to infection, brought on the tuberculosis that would claim her life. In 1923 Jean married Dr Leo Charlton and the couple spent two years in London while Leo was engaged in postgraduate studies. Her later years were spent in a family cottage at the Blue Mountains and in private hospitals where she succumbed to the disease she had fought for almost a decade.

One of Jean's early literary mentors was the poet, Dorothea Mackellar, who encouraged her writing of poetry and who, after Jean's death, wrote an article for Art in Australia in which she labelled Jean 'the best kind of Australian' because of her clear-sightedness, her sense of style and force of emotion. Like her illustrious mother Jean began her literary career early in life, becoming involved when only eighteen with her Aunt Lilian in writing 'legends and native stuff' for a new children's magazine planned for the Mirror. Later, after her return from England, Jean wrote articles for newspapers, the Home magazine and Australia Beautiful. She also contributed largely to 'Sunbeams', a children's supplement to The Sunday Sun, begun in 1921 and edited by her mother.

Like her mother, Jean's deepest ambition was to become a respected novelist, and despite her contribution to the light-hearted The Sunshine Family she was most interested in novels which had serious themes embedded in well-paced stories. Primarily a storyteller, though she lacked her mother's ability to create comic situations, Jean Curlewis wrote in her short life four quite different novels which despite their inherent philosophical exploration are light-hearted and never 'earnest'. Each book is well realised and recreate those aspects of Australian society in the 1920s which were part of the writer's own experience.

The title of Jean Curlewis's first novel, The Ship that Never Set Sail (1921), turned out to be a foreboding reference to Jean's own life, in that she died so young and before she had time to develop her talent. But the title also refers to a recurring theme in her stories, for 'the ship that never set sail' is a symbol, in that first novel, of youth's romantic idealism forced to come to terms with the realities of life and the pressures of society. The Ship that Never Set Sail is the most personal of Jean Curlewis's novels and, although it contains elements that were to appear in her subsequent writing, it has a feminine grace that is not to be found to the same degree in the later yarns. Those novels, however, owe a great deal to genres less explored by her mother and her aunt.

Drowning Maze (1922) opens in the tradition of the school story as it was then established, but moves into melodrama – or Comic-Opera Country as one chapter is headed. Were she writing today, Curlewis's second, third and fourth novels would undoubtedly have moved more directly into 'metafiction' in that she makes deliberate use of the conventions of the genres established by writers such as H. Rider Haggard, John Buchan, Rudyard Kipling and G. K. Chesterton, with direct literary references to such writers, but also an ironic use of plot techniques such as the race against time, the chase, and misunderstandings that must be cleared up before the story can unravel.

All content from Kiddle encyclopedia articles (including the article images and facts) can be freely used under Attribution-ShareAlike license, unless stated otherwise. Cite this article:
Jean Curlewis Facts for Kids. Kiddle Encyclopedia.