The Jeannette Monument is the largest monument in the United States Naval Academy Cemetery. It memorializes the 1881 loss of USS Jeannette while exploring the Arctic ice. Jeannette, with a crew of 33, collapsed and sank under surging ice in the summer of 1881. Her crew, commanded by George W. DeLong, took to the ice dragging three small boats. When open water was found, the boats were used to sail to the Lena Delta of Siberia, 700 miles distant. DeLong commanded a boat of 14 total crew members, Executive Officer Charles W. Chipp's boat's crew was 8 total crew members, and Engineer Officer George W. Melville's boat had 11. Chipp's boat was lost at sea with all hands. Engineer Melville's boat landed in the southern delta, and DeLong's boat came ashore farther to the north on 17 September 1881. Melville quickly found aid, as did the two hardiest sailors of DeLong's crew soon after. The 12 remaining, including DeLong, perished from starvation or exposure. Thus 20 of the original 33 did not survive the expedition.

Ten of the lost twelve from DeLong's boat were discovered by Melville on 23 March 1882, and interred on the Lena Delta. Their bodies were marked by a stone cairn constructed locally, then later to be returned to the United States in 1884. The Jeanette Monument is evocative of the cairn erected by Melville in 1882. It was designed by George Partridge Colvocoresses, drawing instructor at the Academy. It has caked ice draped on the cross, and an antique anchor at the cross's base. The monument is situated near the cemetery's shore with Dorsey Creek, and near the mouth of the creek into the Severn River. Of the twenty names thought to be inscribed, only eleven appear.

The monument was unveiled 30 October 1890, nine years exactly from the last entry in DeLong's journal of the expedition. There are no bodies interred under the monument.

On the cemetery's Cushing Road side:

On the Dorsey Creek side: 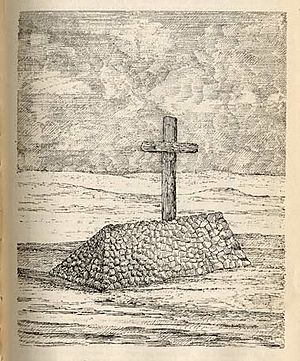 The tomb or mausoleum in which the bodies were deposited was constructed of the lumber of a broken-up flatboat. First a cross was made from timbers one foot square, hewn out of logs which had drifted down the river, and erected on the crest of the hill. It was twenty-two feet high, and the cross-beam was twelve feet long. Around this cross was built a box twenty-two feet long, six feet wide, and two feet deep, located exactly on a north and south line. After the bodies had been placed in the box it was covered with plank. A ridge-pole sixteen feet long was then framed into the cross five feet above the top of the box, and its ends were supported by timbers sloping outward. A roof was then formed by placing timbers side by side against the ridge-poles and ends. The whole outside was then covered with stones, and when completed it resembled a pyramidal mound of stones surmounted by a cross.

Inscribed into the cross of the Jeannette cairn: 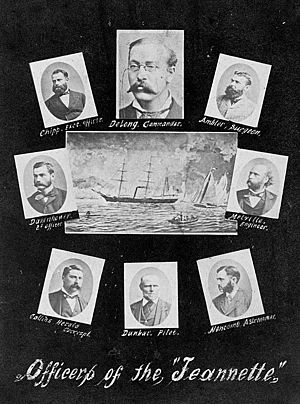 All content from Kiddle encyclopedia articles (including the article images and facts) can be freely used under Attribution-ShareAlike license, unless stated otherwise. Cite this article:
Jeannette Monument Facts for Kids. Kiddle Encyclopedia.