Jeffrey Tyler Burton (born June 29, 1967), nicknamed "The Mayor", is an American former stock car racing driver and current racing commentator. He scored 21 career victories in the Sprint Cup Series, including two Coca-Cola 600s in 1999 and 2001 and the 1999 Southern 500. He currently serves as a color commentator for NBC Sports, having joined them upon their return to their coverage of NASCAR. His son Harrison Burton currently competes in the NASCAR K&N Pro Series and part-time in the NASCAR Camping World Truck Series. His brother Ward Burton and his nephew Jeb Burton have also competed in the Monster Energy NASCAR Cup Series. 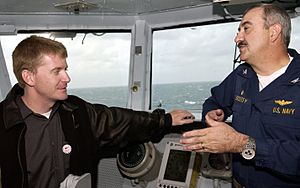 Burton began driving a handful of races in the Busch Series in 1988 in a car owned by his father John Burton. He competed in the full season for Busch Series Rookie of the Year in 1989. In 1990 he won his first career race. He moved to J&J Racing's in 1991 for one year before moving on to FILMAR Racing owned by Filbert Martocci where he would drive an Oldsmobile in 1992, and a Ford sponsored by Baby Ruth in 1993. Burton would later make his first Winston Cup start in 1993.

Burton is the younger brother of Ward Burton, who is a former Sprint Cup driver. Married to wife Kim, they have two children: Paige and Harrison. Harrison, like his father, is a NASCAR driver, and currently races in the K&N Pro Series East. Burton also has another brother, Brian, who did not drive in NASCAR but rather took over the family's construction business. Burton currently resides in Huntersville, North Carolina.

All content from Kiddle encyclopedia articles (including the article images and facts) can be freely used under Attribution-ShareAlike license, unless stated otherwise. Cite this article:
Jeff Burton Facts for Kids. Kiddle Encyclopedia.