Jefferson Mall is a Louisville, Kentucky, shopping mall located near the intersection of Interstate 65 and Outer Loop in southern Louisville. It is the only major mall in southern Jefferson County, and the only of Louisville's six regional shopping centers (400,000+ square feet) serving the south and west county; the others are located in the east county.

Jefferson Mall opened on August 2, 1978, named for the county it is located in. The mall's original anchor stores included JCPenney, Sears, Stewart Dry Goods, and Shillito's. Jefferson Mall originally had no food court, only a Burger King and a casual dining restaurant called Annabelle's. The mall was developed by Richard E. Jacobs Group of Cleveland, Ohio and included 936,000 square feet (87,000 m2) of space.

The mall was sold in 2000 to CBL & Associates Properties of Chattanooga, Tennessee. Louisville's daily newspaper, The Courier-Journal, described the mall as "overlooked" in the Louisville retail scene, not as popular as Oxmoor Center and Mall St. Matthews in eastern Jefferson County. At the time, Jefferson Mall had not been updated substantially since its opening except for the addition of a food court in 1999. The mall's first major renovation was completed in 2003 and included new entrances. 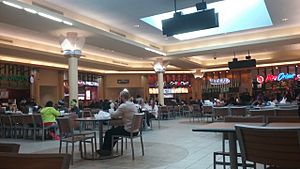 In March 2005 Macy's assumed operation of the former Shillito's, then closed in April 2017 as part of a company-wide downsizing. The former Macy's became Round One Entertainment in December 2018. 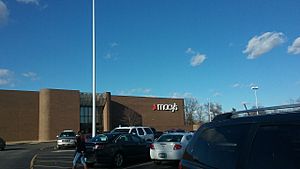 The mall's Macy's on December 29, 2016, four months before its closure

On October 15, 2018, it was announced that Sears would be closing in January 2019 as part of a plan to close 142 stores nationwide which left Dillard's and JCPenney as the only traditional anchors left.

All content from Kiddle encyclopedia articles (including the article images and facts) can be freely used under Attribution-ShareAlike license, unless stated otherwise. Cite this article:
Jefferson Mall Facts for Kids. Kiddle Encyclopedia.