The Gentlemen's Pool House is the oldest spa structure in the United States. The octagonal wood building was built in 1761. The spas are naturally fed by a 98 °F (37 °C) mineral spring. The men's spa holds 40,000 US gallons (150,000 L) of constantly flowing water.

The Ladies' Pool House was built in 1836. The buildings have changed little over the years, being made of wood with a central pool and a roof that is open to the elements. Famous bathers include Thomas Jefferson, who spent three weeks in 1819 bathing three times day and described the waters in a letter to his daughter, Martha Jefferson Randolph, as being of "first merit".

The site was listed as Warm Springs Bathhouses on the Virginia Landmarks Register on November 11, 1968 and the National Register of Historic Places on October 8, 1969.

The Jefferson Pools were ordered closed by Bath County in October 2017 due to the deteriorated condition of the bathhouses becoming a safety hazard.

The owner, The Omni Homestead Resort, reports that their goal is to reopen the pools in late 2020. 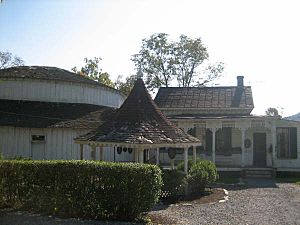 All content from Kiddle encyclopedia articles (including the article images and facts) can be freely used under Attribution-ShareAlike license, unless stated otherwise. Cite this article:
Jefferson Pools Facts for Kids. Kiddle Encyclopedia.