Jenson Railroad Tunnel is the first and only railroad tunnel in the present state of Oklahoma. It was constructed through Backbone Mountain during 1885-6, by the Fort Smith & Southern Railway (FSSR). and has remained in service until the present. At the time it was built, the tunnel was located in the Choctaw Nation in Indian Territory. Since Oklahoma became a state in 1907, the tunnel site has been part of Le Flore County, Oklahoma. It is now primarily used by the Kansas City Southern Railroad (KCS), and is sometimes referred to as the KCS - Jenson Tunnel.

Jenson Tunnel is located on private property northeast of Rock Island and is the only known railroad tunnel in Oklahoma. Now used by the Kansas City Southern, it was built by Frisco Railway in 1885-6. The tunnel was created through Backbone Mountain in what is now Le Flore County, Oklahoma.

One blogger reported that the tunnel was built on the east side of the Arkansas-Indian Territory border, but that a subsequent realignment of the border put it entirely inside the present state of Oklahoma. 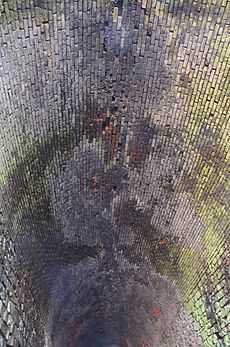 Detail of Jenson Tunnel ceiling in 2015

All content from Kiddle encyclopedia articles (including the article images and facts) can be freely used under Attribution-ShareAlike license, unless stated otherwise. Cite this article:
Jenson Tunnel Facts for Kids. Kiddle Encyclopedia.