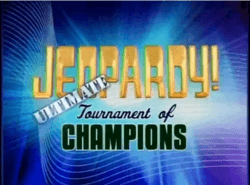 The title card for the Jeopardy! Ultimate Tournament of Champions

The Jeopardy! Ultimate Tournament of Champions was a special tournament done during the 21st season of the American television game show Jeopardy!. 145 contestants who won past Jeopardy! tournaments or won five games played in a 15 week tournament. It lasted from February 9 to May 25, 2005.

In this tournament, the two finalists from four rounds of play went against Ken Jennings, who was the highest winner on a game show with $2,522,700. Those contestants played for a prize of $2,000,000. The two finalists were Brad Rutter and Jerome Vered. Rutter was the show's second-highest winner, while Vered had set a one-day winnings record of $34,000 in 1992. Rutter won the three-day final and the $2,000,000 prize.

All content from Kiddle encyclopedia articles (including the article images and facts) can be freely used under Attribution-ShareAlike license, unless stated otherwise. Cite this article:
Jeopardy! Ultimate Tournament of Champions Facts for Kids. Kiddle Encyclopedia.