Jeremiah Arkham is a fictional character appearing in American comic books published by DC Comics. The character commonly appears in comic book titles associated with the superhero Batman. He is the director of Arkham Asylum, and he is the nephew of Amadeus Arkham, the Asylum's founder.

The character debuted in 1992 in Batman: Shadow of the Bat #1 during the four-part story arc "Batman: The Last Arkham" that kicked off the new series where he was created by Alan Grant and Norm Breyfogle. He became an insane supervillain taking the name of Black Mask.

In Batman: The Last Arkham, Jeremiah is portrayed as the somewhat mean administrator of Arkham Asylum who has delusions that the criminals he houses could one day be housed in society. The Asylum had come into Jeremiah's possession after his uncle Amadeus Arkham died after going mad. Jeremiah proceeded to demolish the asylum before rebuilding it with state-of-the-art systems to keep Arkham's criminals, such as The Joker, The Scarecrow and Cornelius Stirk, contained. 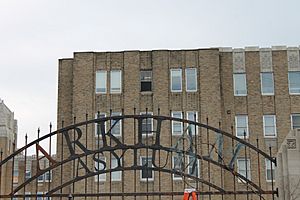 A close-up of the "Arkham Asylum" gates

He also starred in the 3 issue follow up, Arkham Reborn. The story starts with Jeremiah returning to Arkham asylum after it has been destroyed by the Black Glove. On his return he finds that some of the patients are still there, including his three 'special' subjects that no-one knows about. They are No-face, Mirror-man and the Hamburger lady. Once back in his office, Jeremiah finds his office a mess, spooky graffiti on the mirror and the journal of Amadeus Arkham (his Uncle) on his desk, though he thought he had burnt it. He finds his Uncles original plans for the Asylum and decides it is an omen and thus starts to rebuild according to the plans.

The Asylum re-opens with the disgruntled blessing of the Gotham Shield Committee, consisting of Bruce Wayne, D.A. Kate Spencer and Commissioner Gordon. He is also joined by Aaron Cash (head of Arkham security) and the new assistant director, Alyce Sinner. As the Asylum gets more complete more accidents happen. The Raggedy Man is set loose, Clayface gets sick, Mr Freezes room heats up and Killer Croc's tank filtration breaks. As these events pass, Jeremiah becomes more stressed and unhinged.

In addition to this, Jeremiah blames Batman for stopping his inmate's rehabilitation. The situation erupts when Jeremiah locks Batman in a room and sets the inmates of Arkham on him, including Amygdala, the Riddler and others.

After the main storyline is wrapped up, Batman questions whether Jeremiah is himself mad. Jeremiah denies it, but in the closing scene of the comic, he asks himself whether he will end up like his insane uncle and whether he is indeed mad as Batman suggested.

All content from Kiddle encyclopedia articles (including the article images and facts) can be freely used under Attribution-ShareAlike license, unless stated otherwise. Cite this article:
Jeremiah Arkham Facts for Kids. Kiddle Encyclopedia.