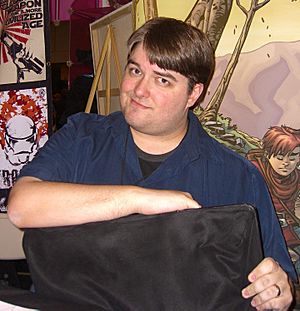 Jeremy Dale (c. 1980 – November 4, 2014) was an American comic book artist. He was best known for his work on G.I. Joe: A Real American Hero. He also worked on the 2008 Harvey Award-winning Popgun v.1 from Image Comics. He worked mostly as a penciller and inker.

Dale was born in 1980 in Indiana. He was married to Kelly and lived in Atlanta, Georgia.

All content from Kiddle encyclopedia articles (including the article images and facts) can be freely used under Attribution-ShareAlike license, unless stated otherwise. Cite this article:
Jeremy Dale Facts for Kids. Kiddle Encyclopedia.