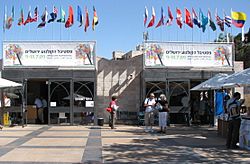 The Jerusalem Cinematheque is a cinematheque and film archive in Jerusalem. It opened in 1973. In 1981, it moved to its present location in Derech Hevron, near the walls of the old city of Jerusalem. The Israeli Film Archive, the national film archive of Israel was moved to the new building at the same time.

All content from Kiddle encyclopedia articles (including the article images and facts) can be freely used under Attribution-ShareAlike license, unless stated otherwise. Cite this article:
Jerusalem Cinematheque Facts for Kids. Kiddle Encyclopedia.