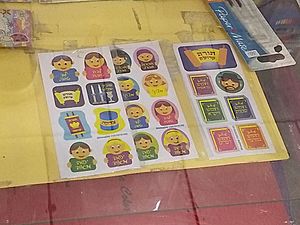 Stickers for Jewish children on display at a bookstore in the Balvanera neighborhood, Buenos Aires

Jewish languages are the various languages and dialects that developed in Jewish communities in the diaspora. The original Jewish language is Hebrew, which was the primary language by Aramaic following the Babylonian exile. Jewish languages feature a mix of indigenous Hebrew and Judeo-Aramaic with the languages of the local non-Jewish population.

For centuries Jews worldwide spoke the local or dominant languages of the regions they migrated to, often developing distinctive dialectal forms or branching off as independent languages.

The usual way these languages developed was through the addition of Hebrew words, phrases, and sometimes grammar used to express uniquely Jewish concepts and concerns. Often they were written in Hebrew letters, including the block letters used in Hebrew today and Rashi script. 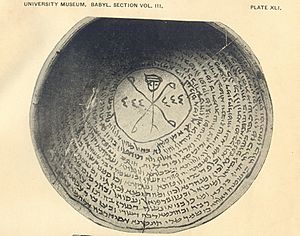 Among the most widely spoken Jewish languages to develop in the diaspora are Yiddish, Ladino, and the Judæo-Arabic group of languages. Yiddish is the Judeo-German language developed by Ashkenazi Jews who migrated to Central Europe, and Ladino, also called Judezmo and Muestra Spanyol (our Spanish), is the Judeo-Spanish language developed by Sephardic Jews who lived in the Iberian peninsula.

Yiddish was the language spoken by the largest number of Jews in the 1850s, but today the three most commonly spoken languages among Jews are English, modern Hebrew, and Russian—in that order.

All content from Kiddle encyclopedia articles (including the article images and facts) can be freely used under Attribution-ShareAlike license, unless stated otherwise. Cite this article:
Jewish languages Facts for Kids. Kiddle Encyclopedia.