Jiffy Lube is an American brand of automotive oil change specialty shops founded in Utah, United States, in 1971. It has been a subsidiary of Royal Dutch Shell since 2002, and is headquartered in Houston, Texas. 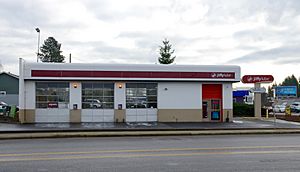 There are about 2,000 Jiffy Lube franchises in North America, all of them independently owned by 252 operators, with about 24 million customers each year as of 2002. The company was ranked first on National Oil and Lube News 2011 Tops in the Fast Lubes Industry Rankings. Also, Jiffy Lube was ranked number 15 in Entrepreneur Magazine’s 2012 Franchise 500 and number 73 on Franchise Times 2011 Top 200 Franchise Chains by Worldwide Sales. 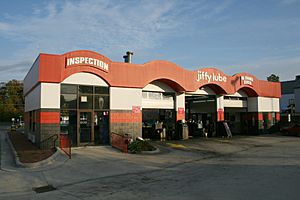 The first Jiffy Lube store was established on 36th Street in Ogden, Utah by Edwin H. Washburn as early as 1971. Over the following years, Washburn franchised a number of Jiffy Lube centers within Utah. In 1979, then-football coach at Western Maryland College W. James Hindman bought out Washburn's seven franchises and established Jiffy Lube International, relocating to Baltimore, Maryland. It is this year which Jiffy Lube generally states as its founding date with Hindman as its founder.

In June 2011, Jiffy Lube introduced a new program called Oil Change Schedule (OCS). The new program allows Jiffy Lube customers to choose how often they have their oil changed based on a number of variables including vehicle manufacturer recommendations, driving habits, and road conditions. The OCS program moves away from the old model of changing oil every 3,000 miles and provides a schedule that is unique for each driver.

All content from Kiddle encyclopedia articles (including the article images and facts) can be freely used under Attribution-ShareAlike license, unless stated otherwise. Cite this article:
Jiffy Lube Facts for Kids. Kiddle Encyclopedia.