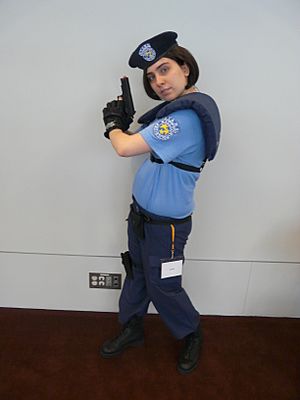 A cosplayer dressed up as Jill.

Jill Valentine is a character of the Resident Evil franchise. She first appeared as a playable character in the first game released in 1996.

In the 2002-2016 movie series, she was played by Sienna Guillory. In Marvel vs. Capcom 3, she was voiced by Kari Wahlgren.

All content from Kiddle encyclopedia articles (including the article images and facts) can be freely used under Attribution-ShareAlike license, unless stated otherwise. Cite this article:
Jill Valentine Facts for Kids. Kiddle Encyclopedia.