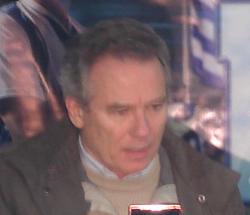 João Nílson Zunino commonly known as Zunino (9 April 1946 – 23 December 2014) was a Brazilian businessman and cardiologist. He served as the president of Avaí Futebol Clube from 2002 until 2013, succeeding Flávio Ricardo Félix. He was also a cardiology doctor and a businessman. He was born in São João Batista, Brazil.

All content from Kiddle encyclopedia articles (including the article images and facts) can be freely used under Attribution-ShareAlike license, unless stated otherwise. Cite this article:
João Nílson Zunino Facts for Kids. Kiddle Encyclopedia.