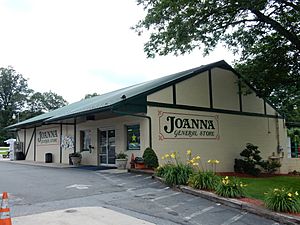 Joanna is an unincorporated community in rural southern Berks County, Pennsylvania. Joanna sits in southern Robeson Township, near the borough of New Morgan, and is also near Caernarvon Township and near the Pennsylvania Turnpike. The Twin Valley School District serves Joanna; the high school is located close to the village.

The community was named after the nearby Joanna blast furnace. The old furnace is preserved as Joanna Furnace Historic Site. A post office called Joanna Furnace was established in 1830, was renamed Joanna in 1890, and the post office was discontinued in 1964.

All content from Kiddle encyclopedia articles (including the article images and facts) can be freely used under Attribution-ShareAlike license, unless stated otherwise. Cite this article:
Joanna, Pennsylvania Facts for Kids. Kiddle Encyclopedia.