Johannes Hermann Zukertort (Polish: Jan Hermann Cukiertort; 7 September 1842 – 20 June 1888) was a Polish-German-British chess master. He was one of the leading world players for most of the 1870s and 1880s, but lost to Wilhelm Steinitz in the World Chess Championship 1886, which is generally regarded as the first World Chess Championship match. He was also defeated by Steinitz in 1872 in an unofficial championship.

Zukertort filled his relatively short life with a wide range of other achievements as a soldier, musician, linguist, journalist and political activist.

Zukertort was born on 7 September 1842 in Lublin, Congress Poland, Russian Empire as Jan Hermann Cukiertort. He said that his mother was the Baroness Krzyżanowska (Krzyzanovska). His father was a Christian Protestant missionary of Jewish origin. Because the Christian Protestant mission among the Jewish population in Russian-occupied Poland was considered illegal and heretical, the Zukertort family emigrated to Prussia. He was educated at the gymnasium of Breslau, and in 1866 at the University of Breslau, from which he graduated in medicine in 1866. As a member of the medical corps of the Prussian army he saw service in 1866 during the Austro-Prussian war, and again during the Franco-Prussian war of 1870–1871.

Zukertort is widely suspected to have embellished his biography. In an account of his life for the Eastern Daily Press in 1872 many claims were made on his behalf: Aristocratic descent, fluency in nine languages (fourteen, according to other sources), and proficiency in swordsmanship, dominoes, and whist; it was also stated that he had played 6,000 games of chess with Adolf Anderssen, fought in numerous battles, and was awarded the Order of the Red Eagle, the Iron Cross of the German Army, and seven other medals. He also found time to get an M.D. at Breslau in 1865, and work on the staff of the Allgemeine Zeitung – Otto von Bismarck's private organ – in addition to writing two chess books and working as the editor of a chess magazine for several years. The Oxford Companion to Chess comments, "There is some truth in the last sentence: He was co-author of the books [and] co-editor of the chess magazine."

Unlike the majority of attacking players, Zukertort preferred openings such as 1. c4 and 1. Nf3 that are closed or semi-closed and offered the possibility of transpositions – in fact in the early 1880s 1. Nf3 was known as "Zukertort's Opening", 40 years before it became known as the Réti Opening.

In his prime Zukertort also excelled at blindfold chess. In 1876, he played sixteen games simultaneously while blindfolded, winning eleven, drawing four, and losing only one.

Zukertort learned to play chess in Breslau when he was about age 19. Entering a tournament in that city, and receiving the odds of the queen, he lost every game, whereupon he took up the study of Bilguer's Handbuch, with the result that in 1862 he won games from the leading German chess player Adolf Anderssen at the odds of a knight. Zukertort studied with Anderssen and within a very few years he became one of the strongest players in Germany.

Although Zukertort lost both his matches against Steinitz, he proved that he was superior to other opponents throughout the late 1870s and early 1880s. During this period top-class tournaments were rare and Zukertort's best performances were mostly in matches, notably against Anderssen in 1871 and Joseph Henry Blackburne in 1881 (6 wins, 2 losses, 5 draws). Nonetheless Zukertort was one of the most successful tournament players of his time: third place behind Steinitz and Blackburne at London, 1872; first place at Cologne, and second at Leipzig in 1877; tied for first with Simon Winawer at the Paris 1878 chess tournament and beat Winawer in the playoff; second at Berlin in 1881, behind Blackburne; tied for fourth at Vienna in 1882; first at London in 1883, 3 points ahead of Steinitz. The 1878 win in Paris led to some suggestion that Zukertort was the world's leading player, although Steinitz did not compete.

Zukertort's win in the London 1883 chess tournament was his most significant success: He won his games against most of the world's leading players, scoring 22/26, and he finished 3 points ahead of Steinitz, who was second with 19/26. This tournament established that Steinitz and Zukertort were clearly the best two players in the world, and led to the World Chess Championship match between these two.

After his 1886 defeat, Zukertort's health suffered and he was a greatly weakened player for the remaining two years of his life. Diagnoses of his ailments include rheumatism, coronary heart disease, kidney problems, and arteriosclerosis. His results after the 1886 match declined steeply: Seventh at London, and third at Nottingham in 1886; fifteenth at Frankfurt, and fourth at London in 1887; lost a match in 1887 against Blackburne (1 win, 5 losses, and 8 draws); and seventh at London in 1888.

Poor health and lack of physical stamina appeared to be one of Zukertort's two long-term weaknesses: Some commentators attributed to illness the severity of his defeat in the 1872 match against Steinitz; aside from the tournaments mentioned above, in the 1883 London tournament he won 22 of his first 23 games – enough to give him an uncatchable lead – but lost his last 3 games.

His other weakness was that, while no one had greater attacking flair, Zukertort never approached Steinitz' understanding of positional play, and Steinitz often outmaneuvered him fairly simply. 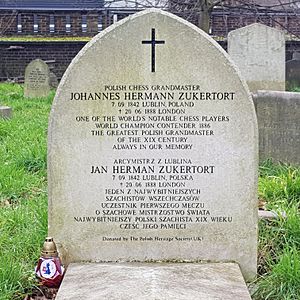 Zukertort died on 20 June 1888, in London, from a cerebral haemorrhage after playing a game in a tournament at Simpson's Divan, which he was leading at the time. He is buried in Brompton Cemetery, London.

It is said that Steinitz and Zukertort, present at the same dinner party, both rose in response to a toast to the "greatest chess-player in the world". Research by Edward G. Winter suggests that this story has been embellished.

All content from Kiddle encyclopedia articles (including the article images and facts) can be freely used under Attribution-ShareAlike license, unless stated otherwise. Cite this article:
Johannes Zukertort Facts for Kids. Kiddle Encyclopedia.