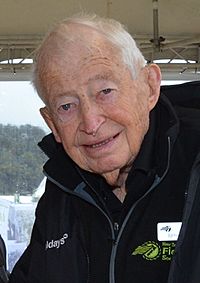 John Thomas Kneebone CMG (1935 – 28 June 2020) was a New Zealand farming leader. He was elected as president of Federated Farmers in 1974. He was appointed to the Waitangi Tribunal in 1989. He was the inspiration behind the National Agricultural Fieldays in 1969.

In the 1988 New Year Honours, Kneebone was appointed a Companion of the Order of St Michael and St George, for public services and services to agriculture.

All content from Kiddle encyclopedia articles (including the article images and facts) can be freely used under Attribution-ShareAlike license, unless stated otherwise. Cite this article:
John Kneebone Facts for Kids. Kiddle Encyclopedia.