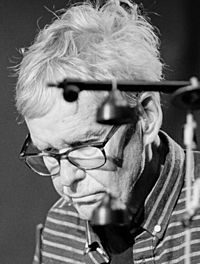 In the late 1960s Christensen played alongside Jan Garbarek on several recordings by the composer George Russell. He, along with Jan Garbarek and Palle Danielsson, was a member of the legendary Keith Jarrett "European Quartet" of the 1970s which produced five excellent jazz recordings on ECM Records.

He was married to actress, minister, and theater director Ellen Horn. He was the father of singer and actress Emilie Stoesen Christensen.

All content from Kiddle encyclopedia articles (including the article images and facts) can be freely used under Attribution-ShareAlike license, unless stated otherwise. Cite this article:
Jon Christensen Facts for Kids. Kiddle Encyclopedia.