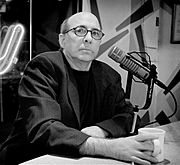 Jonathan Paul Katz (born December 1, 1946) is an American stand-up comedian, actor, and writer. He is known for his role as Dr. Katz in Dr. Katz, Professional Therapist. Katz won an Emmy Award for "Outstanding Voice-Over Performance" in 1995.

Katz was born in New York City to a Jewish-Hungarian immigrant family. He was educated at Goddard College.

Katz is a close friend of playwright David Mamet, with whom he attended Goddard College. Katz co-wrote "House of Games]" with Mamet and had small roles in the Mamet-directed films "Things Change," "Homicide," "The Spanish Prisoner," and "State and Main".

Originally a musician and songwriter, Katz fronted a rhythm and blues group called "Katz and Jammers" before serving as the musical director for Robin Williams' 1979 standup tour. In 1998, he released Brandon Project, a blues album.

In 1996, Katz was diagnosed with multiple sclerosis. The initial symptoms began that year: "I was working on a TV show called "Ink" with Ted Danson, and after every episode we would take a curtain call and I noticed that I needed a head-start."

Hiding his condition became too much of a burden for Katz and he eventually disclosed it. He began speaking publicly as part of a tour sponsored by a manufacturer of medications used to treat MS.

"People have been pretty supportive; nobody ever had me in mind for an action film because of the kind of work I do -- mostly in the world of animation, which is not a big issue because as a person, I can't run that fast; as a cartoon character, I can fly -- literally."

Katz, who now gets around with the help of a motorized scooter and performs onstage with the aid of a cane, says he doesn't regret his decision: "One of the reasons I disclosed my condition is because it is much easier to live with MS than to pretend you don't have it. If I could convince everyone of that, my job here is done."

Katz is married to Suzan Katz. They have two children.

All content from Kiddle encyclopedia articles (including the article images and facts) can be freely used under Attribution-ShareAlike license, unless stated otherwise. Cite this article:
Jonathan Katz Facts for Kids. Kiddle Encyclopedia.