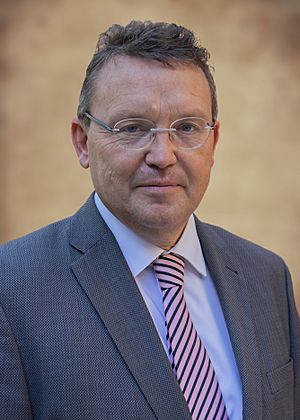 He studied political sciences at the University of Amsterdam and has been working at the group Leaderships Art at the University of Leiden since 1984. De Vries was promoted and got his degree in 1989 from H. Daudt. en H. Daalder for the article he wrote on "Ground Politics and Cabinet Crisis in the Netherlands". He almost became faction leader of the Partij van de Arbeid (the Dutch Labour Party), but narrowly lost to Wouter Bos. He teaches students at Leiden University. He is a professor on Political Sciences (Dutch:Hoogleraar) and teaching is his profession. He is a columnist for a Dutch language website.

Jouke de Vries lives in Leiden near the University where he teaches. He married in 1986 and has two sons and a daughter.

All content from Kiddle encyclopedia articles (including the article images and facts) can be freely used under Attribution-ShareAlike license, unless stated otherwise. Cite this article:
Jouke de Vries Facts for Kids. Kiddle Encyclopedia.