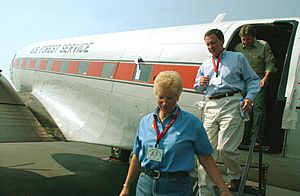 Judy Martz was born on July 28, 1943 in Big Timber, Montana. She graduated from Butte High School in 1961. She also attended Eastern Montana College. She was a member of the US Olympic speed skating team and competed in the 1964 Winter Olympics. She married her husband, Harry Martz, in 1965.

Judy Martz was the 22nd Governor of Montana.

On April 1, 2005, Judy Martz was appointed to the board of directors of TASER International. As of September of 2016, she is still on the board.

On November 11, 2014, it was announced that Judy Martz had stage 2 pancreatic cancer and was undergoing treatment in Arizona. She died of the disease on October 30, 2017 in Butte, Montana at the age of 74.

All content from Kiddle encyclopedia articles (including the article images and facts) can be freely used under Attribution-ShareAlike license, unless stated otherwise. Cite this article:
Judy Martz Facts for Kids. Kiddle Encyclopedia.