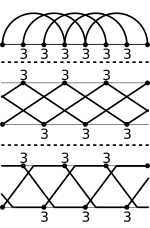 Diagrams for the cascade pattern, siteswap: 3

Shannon's theorem for the cascade pattern

Juggling notation is the written depiction of concepts and practices in juggling. Toss juggling patterns have a reputation for being "easier done than said" – while it might be easy to learn a given maneuver and demonstrate it for others, it is often much harder to communicate the idea accurately using speech or plain text. To circumvent this problem, various numeric or diagram-based notation systems have been developed to facilitate communication of patterns or tricks between jugglers, as well the investigation and discovery of new patterns.

While diagrams are the most visual and reader-friendly way to notate many juggling patterns, they rely on images, so are complicated to produce and unwieldy to share via text or speech. 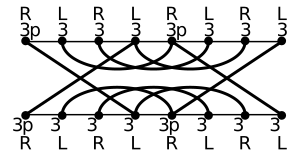 The following notation systems use only numbers and common characters. The patterns can easily be communicated by text. Most numeric systems are designed to be processed by software juggling simulators — for example, to view juggling patterns as computer animations.

Developed by mathematically inclined jugglers Bengt Magnusson and Bruce Boppo Tiemann in 1985, siteswap is by far the most common juggling notation.

A given juggling pattern is represented by a sequence of digits, like "333", "97531", or "744". Each digit represents the number of throws that occur by the time that same prop will be caught. For example, "333" represents a common three-ball cascade, where three props are thrown before the same prop will be caught and thrown again. Within the "531531" pattern, the prop thrown first, the '5' throw, will not be caught until five throws have been made, including itself, where it will be thrown again as a '1'. The prop thrown next, the '3', will be thrown again on the third throw afterwards, the next '3'. And the next prop is thrown with a '1' throw, which is a direct pass to the other hand and will be thrown on the very next throw as a '5'.

Because the number represents the number of throws that occur before that prop will be caught, it also can be thought to describe how high one throws the prop, or how long it remains in the air relative to the other throws, where even numbers inevitably come back to the same hand and odd numbers cross over to the other hand.

"Vanilla" siteswap is the most basic form of siteswap and uses only a simple string of digits to describe patterns that throw only one prop at a time, alternating between hands. For slightly more complicated patterns, extra rules and syntax are added to create the following two siteswap extensions:

Vanilla, synch, and multiplex siteswap are the "standard" forms of siteswap. Not only are they understood by jugglers, there are also many computer programs capable of animating juggling patterns entered in siteswap notation.

Other extensions to siteswap have been developed for specific purposes. These are far less common than the "standard" forms of siteswap, understood by far fewer jugglers and only specialized software.

All content from Kiddle encyclopedia articles (including the article images and facts) can be freely used under Attribution-ShareAlike license, unless stated otherwise. Cite this article:
Juggling notation Facts for Kids. Kiddle Encyclopedia.