Kids Encyclopedia Facts
Not to be confused with Julie Clarke or Julia Clark. 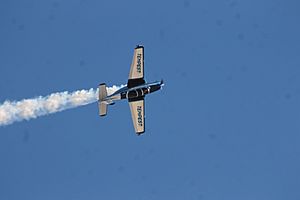 Julie E. Clark (born June 27, 1948) is a retired American aerobatic air show aviator and commercial airline pilot. She started her commercial flying career with Golden West Airlines as a first officer and ended it in 2003 as a Northwest Airlines Airbus A320 Captain. She was one of the first female pilots to work for a major airline, and has been voted as "Performer of the Year" several times for her air show performances.

All content from Kiddle encyclopedia articles (including the article images and facts) can be freely used under Attribution-ShareAlike license, unless stated otherwise. Cite this article:
Julie Clark Facts for Kids. Kiddle Encyclopedia.