The Just for Laughs Museum was a Canadian museum that opened in 1993, dedicated to humour (mainly stand-up comedy) located in Montreal, Quebec. The museum closed in 2011. It had been visited by more than two million people since its opening. 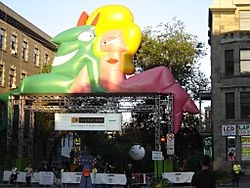 Inflatable Victor with his wife, Rose

The Just for Laughs Museum was created by Gilbert Rozon, founder of the Just for Laughs festival in the same city 10 years earlier. Opened in 1993, the museum was a venue for all things funny with displays, exhibitions, and a multi-functional space for the presentation of public, private or professional events. The Museum was located at 2111 Saint Laurent Boulevard, Montreal, QC, Canada. Perhaps coincidentally, St-Laurent is the French name of Lawrence of Rome, the patron saint of comedians.

The Museum was affiliated with the Canadian Museums Association, the Canadian Heritage Information Network, and the Virtual Museum of Canada.

The museum closed its doors permanently on 1 January 2011 due to loss of profits associated with the costs of upkeeping the over one hundred year old building.

All content from Kiddle encyclopedia articles (including the article images and facts) can be freely used under Attribution-ShareAlike license, unless stated otherwise. Cite this article:
Just for Laughs Museum Facts for Kids. Kiddle Encyclopedia.