Erynnis juvenalis, the Juvenal's duskywing, is a butterfly of the family Hesperiidae. 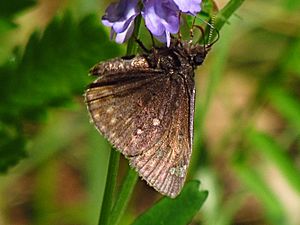 It is common in eastern North American oak woods from southern Manitoba to southern Quebec and Nova Scotia southward to Texas and Florida. This dark-brown skipper is larger than most eastern duskywings (wingspan: 30 to 37 mm). It has one brood in the spring (May to late June) in the east but two broods in spring and summer in the southwest. Both sexes have two to four white spots on the forewing. The females have grayer forewings and are more boldly marked. Both sexes have two spots near the upper margins of the ventral side of hindwings that are diagnostic of the species. Larval food plant: oaks

All content from Kiddle encyclopedia articles (including the article images and facts) can be freely used under Attribution-ShareAlike license, unless stated otherwise. Cite this article:
Juvenal's duskywing Facts for Kids. Kiddle Encyclopedia.