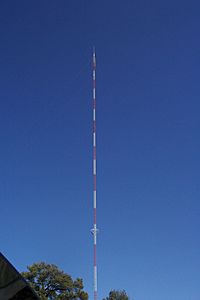 A photo of the KATV tower.

On January 11, 2008, at 12:46 PM local time (1846 UTC), the tower collapsed. The cause of the collapse remains unknown. The crew replaced older guy wires, massive cables that keep the structure in place, and claimed that as they were loosening one of the older guy wires, the structure suddenly began to shake and then collapsed. No serious injuries took place. The structure broke into three pieces as it came crashing down, which was what it was designed to do.

All content from Kiddle encyclopedia articles (including the article images and facts) can be freely used under Attribution-ShareAlike license, unless stated otherwise. Cite this article:
KATV tower Facts for Kids. Kiddle Encyclopedia.