Kalju Lepik published his first poems in 1939 in Tartu students' journals Iloli and Tuleviku Rajad ('The Paths of Future'). In 1940 he founded the art society Tuulisui, that continued its existence in Swedish exile from 1945 on. In 1943 and 1944 he fought as a conscript in the Waffen-SS unit Estonian Legion. He became a refugee in 1944 and settled in Stockholm for many years.

Kalju Lepik consistently defended the rights of the Estonian refugees in Sweden. In 1946 he founded in Stockholm the exile publishing house Eesti Raamat. In 1966 he became the head of the Baltic Archive in Sweden. From 1982 on, Lepik was the chairman of the Estonian Writers' Union in exile (Välismaine Eesti Kirjanike Liit). In 1990 and 1998, Kalju Lepik was awarded the Juhan Liiv poetry prize as well as the annual prize of Estonian literature in 1998.

Kalju Lepik's earlier poems are passionately patriotical. In addition, satire can be found. In Lepik's later poetry, pessimistic elements prevail. In his later years, he gradually discarded all kinds of political motives and exalted patriotic pathos. 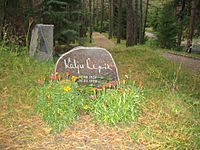 Kalju Lepik was married to Asta Lepik. He is the father of the Estonian politician and diplomat Aino Lepik von Wirén (born 1961). His last collections of poetry were published in Estonia and he died there in 1999.

All content from Kiddle encyclopedia articles (including the article images and facts) can be freely used under Attribution-ShareAlike license, unless stated otherwise. Cite this article:
Kalju Lepik Facts for Kids. Kiddle Encyclopedia.