Kids Encyclopedia Facts
This page is about the settlement in New Zealand. For the Filipino dish, see Kare-kare. 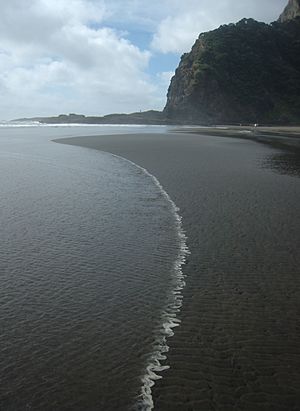 Karekare is a small coastal settlement in the Auckland Region of northern New Zealand, sandwiched between the Waitākere Ranges and a large black sand surf beach.

It is located 35 kilometres (22 mi) west of Auckland city centre, south of the larger beach of Piha. It is north of Whatipu, south of Piha and west of the Centennial Memorial Park and Water Catchment area, which cover most of the native bushland Waitakere Ranges.

Karekare is a popular destination for Aucklanders in summer, but receives fewer visitors than nearby Piha, partly because the road is narrow and only recently sealed. There are surf patrols in summer. 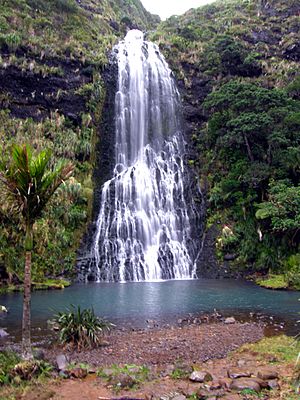 A local attraction is the Waitakere waterfall - Karekare falls, a short walk from the road.

The settlement was immortalised in song by Crowded House on their Together Alone album in 1993, much of which was recorded at Karekare; the well known Dub/Reggae group, Salmonella Dub, used the name as well on their album Feel the Seasons Change - Live with the NZSO. The location will also be familiar to viewers of the film The Piano, which included beach scenes shot at Karekare and Piha.

The rips along this section of coast are very unpredictable and can shift with little warning, and have caused a number of drownings. Lifeguards advise swimming between the red and yellow flags, during patrol hours.

There is a small community primary school (Lone Kauri School) with approximately 30 students located at Karekare. It is an independently operating branch of Oratia School, under the supervision of a senior teacher.

All content from Kiddle encyclopedia articles (including the article images and facts) can be freely used under Attribution-ShareAlike license, unless stated otherwise. Cite this article:
Karekare, New Zealand Facts for Kids. Kiddle Encyclopedia.