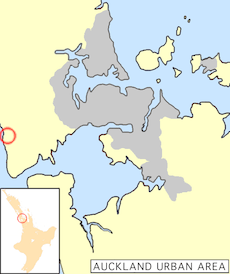 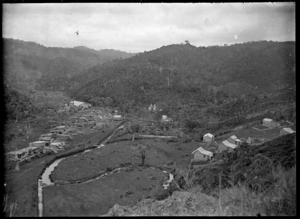 Timber settlement at Piha circa 1916

Piha is a coastal settlement on the western coast of the Auckland Region in New Zealand. It is one of the most popular beaches in the area and a major day-trip destination for Aucklanders throughout the year, and especially in summer.

The proportion of people born overseas was 19.2%, compared with 27.1% nationally.

Although some people objected to giving their religion, 66.8% had no religion, 18.9% were Christian, and 5.8% had other religions. 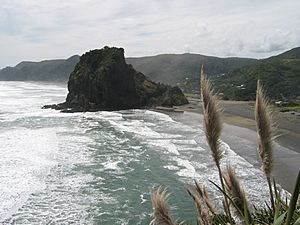 As well as two surf beaches there are also a sheltered lagoon and several streams in the area. The coastline and forested Waitākere Ranges offer a number of walks, or tramps, ranging from easy to very difficult. Due to the spread of the incurable kauri dieback disease large parts of the Waitākere Ranges were closed from 2018 until further notice.

Piha is a well known black sand beach, due to the high iron content, which is of volcanic origin.

Lion Rock is a natural formation dividing North and South Piha beaches. It is an eroded 16-million-year-old volcanic neck, named for its similarity to a lying male lion when viewed from the rear (shore side), Lion Rock is immediately visible to visitors as they descend along the only access road. Lion Rock has become iconic not only of Piha, but of Auckland's West Coast in general. The rock was settled in Pre-European times by Māori, and was the location of the Whakaari Pā. Archaeological surveys have shown the remains of platforms, midden and terraces on Lion Rock, as well as fragments of traditional textiles, dating back to a time before European contact. Lion Rock was featured on stamps as well as an Auckland phone book, and in December 1919 a memorial to local sawmillers who served in World War One was unveiled on Lion Rock. 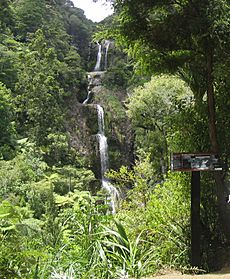 About 2 km inland, on the Glen Esk stream, are the Kitekite Falls which while not very large are picturesque. Swimming is possible all seasons (though only for the cold hardened outside of summer) in a pool just above the falls. At the bottom of the falls is a sheltered picnic area popular with families in the summer time.

About 2 km inland, on the Piha stream, is a small canyon..

About 1 km south of the South Beach is 'The Gap', which at low tide provides another lagoon and a blowhole. 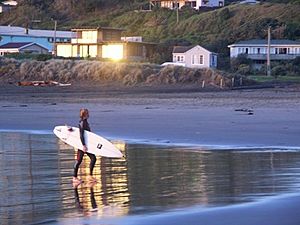 A surfer leaving the water

Piha was the birthplace of New Zealand board riding in 1958, and has been the scene of both New Zealand national and international surfing championship competitions.

Two surf lifesaving clubs provide surf patrols in summer. Piha Surf Life Saving Club, the home of the TV series Piha Rescue, patrols the section of the beach to the south of Lion Rock. United North Piha Lifeguard Service is responsible for the section of the beach north of Lion Rock. Both clubs provide patrolled areas designated by red and yellow flags as is the custom with Surf Lifesaving in New Zealand and many other countries.

The rip currents along this section of coast are very unpredictable and can shift with little warning. They claim many lives despite the efforts of surf life-savers. Most of these drownings, however, occur after lifeguards are off duty or after rock fisherman wearing heavy clothing are washed off rocks, out of sight of the lifeguards. Lifeguards advise swimming between the red and yellow flags, during patrol hours.

After the death of two men at Piha in February 2013, lifeguards say the water fools swimmers by appearing deceptively calm, obscuring strong rips, and people should stay out of the water if they aren't confident swimmers.

Piha Beach was the setting for a popular New Zealand reality television show. Aptly named Piha Rescue, it ran for 12 series over 14 years on TV1 and it featured the lives of the surf life savers at Piha Beach and educated the public on the beach safety, rip currents and swimming between the flags.

The view from Lion Rock.

All content from Kiddle encyclopedia articles (including the article images and facts) can be freely used under Attribution-ShareAlike license, unless stated otherwise. Cite this article:
Piha Facts for Kids. Kiddle Encyclopedia.