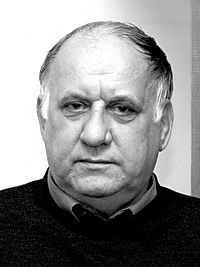 Karel Kuklík (March 7, 1937 – August 18, 2019) was a Czech photographer. He was born in Prague. He was one of the representatives of Informel in Czech fine art photography. He was an artist influenced by abstract and surrealist. In 2000 he co-founded the photographic group Český dřevák.

All content from Kiddle encyclopedia articles (including the article images and facts) can be freely used under Attribution-ShareAlike license, unless stated otherwise. Cite this article:
Karel Kuklík Facts for Kids. Kiddle Encyclopedia.