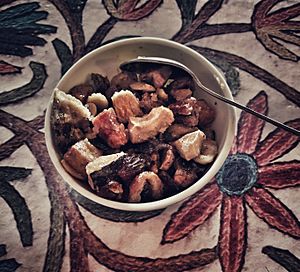 Shufta, a Kashmiri dessert, at Matamaal, New Delhi's first Kashmiri pandit restaurant. One of the main differences between Kashmiri pandit and Kashmiri Muslim food is the use onion and garlic.

Kashmiri cuisine is the cuisine of the Kashmir Valley in the Indian subcontinent. Rice is the staple food of Kashmiris and has been so since ancient times. Meat, along with rice, is the most popular food item in Kashmir. Meat, along with rice, some vegetables and salad are prepared on special occasions like Eid only. Kashmiris consume meat voraciously. Despite being Brahmin, most Kashmiri Hindus are meat eaters. 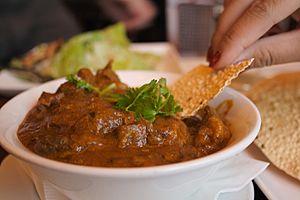 Some noted Kashmiri dishes include:

The Kashmir Valley is noted for its bakery tradition. On the Dal Lake in Kashmir or in downtown Srinagar, bakery shops are elaborately laid out. Bakers sell various kinds of breads with golden brown crusts topped with sesame and poppy seeds. Tsot and tsochvor are small round breads topped with poppy and sesame seeds, which are crisp and flaky, sheermal, baqerkhayn (puff pastry), lavas (unleavened bread) and kulcha are also popular. Girdas and lavas are served with butter.

Kashmiri bakerkhani has a special place in Kashmiri cuisine. It is similar to a round naan in appearance, but crisp and layered, and sprinkled with sesame seeds. It is typically consumed hot during breakfast.

Kashmiris are heavy tea drinkers. Kashmiris don't use the word "Kashmiri Chai". The word "Noon" in Kashmiri means salt. The most popular drink is a pinkish colored salted tea called "noon chai." It is made with black tea, milk, salt and bicarbonate of soda. The particular color of the tea is a result of its unique method of preparation and the addition of soda. The Kashmiri Hindus more commonly refer to this chai as "Sheer Chai." The Kashmiri Muslims refer to it as "Noon Chai" or "Namkeen Chai", both meaning salty tea.

Noon Chai or Sheer Chai is a common breakfast tea in Kashmiri households and is taken with breads like baqerkhani brought fresh from Qandur (Kashmiri : کاندُر ) or bakers. It is one of the most basic and essential food items in a Kashmiri household. Tea was as served in large samavars. Now, the use of Samavars is limited to special occasions and normally kettles are used.

At marriage feasts, festivals, and religious places, it is customary to serve kahwah – a green tea made with saffron, spices, and almonds or walnuts. Over 20 varieties of Kahwah are prepared in different households. Some people also put milk in kahwah (half milk and half kahwah). This chai is also known as "Maugal Chai" by some Kashmiri Hindus from the smaller villages of Kashmir. Kashmiri Muslims and Kashmiri Hindus from the cities of Kashmir refer to it as Kahwah or Qahwah.

All content from Kiddle encyclopedia articles (including the article images and facts) can be freely used under Attribution-ShareAlike license, unless stated otherwise. Cite this article:
Kashmiri cuisine Facts for Kids. Kiddle Encyclopedia.