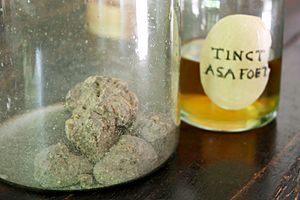 Unprocessed asafoetida in a jar and as a tincture

Asafoetida ( also spelled asafetida) is the dried latex (gum oleoresin) exuded from the rhizome or tap root of several species of Ferula, perennial herbs growing 1 to 1.5 m (3.3 to 4.9 ft) tall. They are part of the celery family, Umbelliferae. Asafoetida is thought to be in the same genus as silphium, a North African plant now believed to be extinct, and was used as a cheaper substitute for that historically important herb from classical antiquity. The species are native to the deserts of Iran and mountains of Afghanistan where substantial amounts are grown.

Asafoetida has a pungent smell, lending it the trivial name of "stinking gum". The odor dissipates upon cooking; in cooked dishes, it delivers a smooth flavour reminiscent of leeks or other onion relatives. Asafoetida is also known colloquially as "devil's dung" or "food of the devils" in English (and similar expressions in many other languages).

Etymology and other names

The English name is derived from asa, a latinised form of Persian azā, meaning 'mastic', and Latin foetidus meaning 'smelling, fetid', which refers to its strong sulfurous odour.

In the United States, a folk spelling and pronunciation is "asafedity". Its pungent odour has resulted in its being known by many unpleasant names. In French it is known (among other names) as merde du Diable, meaning 'Devil's dung' in English.

Typical asafoetida contains about 40–64% resin, 25% endogeneous gum, 10–17% volatile oil, and 1.5–10% ash. The resin portion is known to contain asaresinotannols A and B, ferulic acid, umbelliferone and four unidentified compounds. The volatile oil component is rich in various organosulfide compounds, such as 2-butyl-propenyl-disulfide, diallyl sulfide, diallyl disulfide (also present in garlic) and dimethyl trisulfide, which is also responsible for the odor of cooked onions. The organosulfides are primarily responsible for the odor and flavor of asafoetida.

Many Ferula species are utilized as the sources of asafoetida. Most of them are characterized by abundant sulfur-containing compounds in the essential oil. 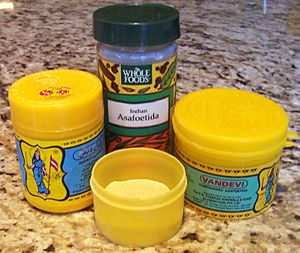 This spice is used as a digestive aid, in food as a condiment, and in pickling. It plays a critical flavoring role in Indian vegetarian cuisine by acting as a savory enhancer. Used along with turmeric, it is a standard component of lentil curries, such as dal, chickpea curries, and vegetable dishes, especially those based on potato and cauliflower. Asafoetida is used in vegetarian Indian Punjabi and South Indian cuisine where it enhances the flavor of numerous dishes, where it is quickly heated in hot oil before sprinkling on the food. Kashmiri cuisine also uses it in lamb/mutton dishes such as Rogan Josh. It is sometimes used to harmonise sweet, sour, salty, and spicy components in food. The spice is added to the food at the time of tempering. Sometimes dried and ground asafoetida (in small quantities) can be mixed with salt and eaten with raw salad.

In its pure form, it is sold in the form of chunks of resin, small quantities of which are scraped off for use. The odor of the pure resin is so strong that the pungent smell will contaminate other spices stored nearby if it is not stored in an airtight container.

The resin-like gum comes from the dried sap extracted from the stem and roots, and is used as a spice. The resin is greyish-white when fresh, but dries to a dark amber colour. The asafoetida resin is difficult to grate and is traditionally crushed between stones or with a hammer. Today, the most commonly available form is compounded asafoetida, a fine powder containing 30% asafoetida resin, along with rice flour or maida (white wheat flour) and gum arabic.

Ferula assa-foetida is a monoecious, herbaceous, perennial plant of the family Apiaceae. It grows to 2 m (6.6 ft) high, with a circular mass of 30–40 cm (12–16 in) leaves. Stem leaves have wide sheathing petioles. Flowering stems are 2.5–3 m (8.2–9.8 ft) high and 10 cm (3.9 in) thick and hollow, with a number of schizogenous ducts in the cortex containing the resinous gum. Flowers are pale greenish yellow produced in large compound umbels. Fruits are oval, flat, thin, reddish brown and have a milky juice. Roots are thick, massive, and pulpy. They yield a resin similar to that of the stems. All parts of the plant have the distinctive fetid smell.

Asafoetida was familiar in the early Mediterranean, having come by land across Iran. It entered Europe from an expedition of Alexander the Great, who, after returning from a trip to northeastern ancient Persia, thought they had found a plant almost identical to the famed silphium of Cyrene in North Africa—though less tasty. Dioscorides, in the first century, wrote, "the Cyrenaic kind, even if one just tastes it, at once arouses a humour throughout the body and has a very healthy aroma, so that it is not noticed on the breath, or only a little; but the Median [Iranian] is weaker in power and has a nastier smell." Nevertheless, it could be substituted for silphium in cooking, which was fortunate, because a few decades after Dioscorides' time, the true silphium of Cyrene became extinct, and asafoetida became more popular amongst physicians, as well as cooks.

Asafoetida is also mentioned numerous times in Jewish literature, such as the Mishnah. Maimonides also writes in the Mishneh Torah "In the rainy season, one should eat warm food with much spice, but a limited amount of mustard and asafoetida [חִלְתִּית chiltit]."

Though it is generally forgotten now in Europe, it is still widely used in India. Asafoetida is eaten by Brahmins and Jains as a substitute for onion and garlic, which they were forbidden to eat. Devotees of the Hare Krishna also use Hing in their food, as they are not allowed to consume onions or garlic. Their food has to be presented to Lord Krishna for sanctification (to become Prasadam) before consumption and onions and garlic can't be offered to Krishna.

Asafoetida was described by a number of Arab and Islamic scientists and pharmacists. Avicenna discussed the effects of asafoetida on digestion. Ibn al-Baitar and Fakhr al-Din al-Razi described some positive medicinal effects on the respiratory system.

After the Roman Empire fell, until the 16th century, asafoetida was rare in Europe, and if ever encountered, it was viewed as a medicine. "If used in cookery, it would ruin every dish because of its dreadful smell," asserted Garcia de Orta's European guest. "Nonsense," Garcia replied, "nothing is more widely used in every part of India, both in medicine and in cookery." During the Italian Renaissance, asafoetida was used as part of the exorcism ritual.

All content from Kiddle encyclopedia articles (including the article images and facts) can be freely used under Attribution-ShareAlike license, unless stated otherwise. Cite this article:
Asafoetida Facts for Kids. Kiddle Encyclopedia.