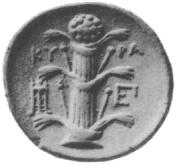 Ancient silver coin from Cyrene depicting a stalk of Silphium 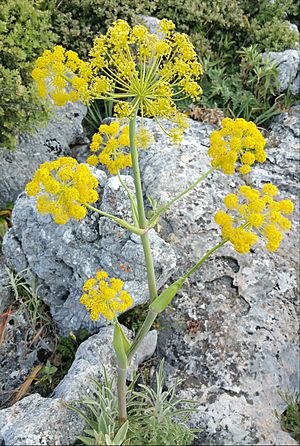 Silphium was a plant that was used in classical antiquity as a seasoning and as a medicine. It is also known as silphion, laserwort, or laser. It was the essential item of trade from the ancient North African city of Cyrene. Most of the coins from Cyrene show a picture of the plant. The valuable product was the plant's resin (called laser, laserpicium, or lasarpicium).

Silphium was an important species. The Egyptians and the Minoan civilization of Knossos used a special glyph in their writing for the silphium plant. It was used by most ancient Mediterranean cultures. The Romans considered it "worth its weight in denarii" (silver coins). Legend said that it was a gift from the god Apollo.

Which plant species silphium was is unclear. It is commonly believed to be a now-extinct plant of the genus Ferula. The still-living plant species Ferula tingitana has been suggested as another possibility. Another resin from different Ferula species, asafoetida, was used as a cheaper substitute for silphium. Asafoetida is still available.

All content from Kiddle encyclopedia articles (including the article images and facts) can be freely used under Attribution-ShareAlike license, unless stated otherwise. Cite this article:
Silphium Facts for Kids. Kiddle Encyclopedia.