Katama is a residential area in the town of Edgartown, Massachusetts, on the south shore of the island of Martha's Vineyard. It is bordered on the west by Edgartown Great Pond, on the east by Katama Bay (separating Katama from the island of Chappaquiddick) and on the south by the Atlantic Ocean. It starts at a fork in the road when you head south on Katama Road out of central Edgartown; Katama Road leads to the left and Herring Creek Road leads to the right.

The terrain is a flat outwash plain, characterized by sandy soil and few trees. It is sometimes referred to as the "Great Plains."

Katama has been a popular summer resort since the late 19th century. From 1874-1896, Katama was the terminus of the Martha's Vineyard Railroad. The train Active ran between the Oak Bluffs Wharf and Mattakeeset Lodge in Katama. The Mattakeeset Lodge (note the spelling variations of Mattakesett) was located on the shore of Katama Bay and is pictured below in a photo from the New York Library collection. A portion of the lodge including one tower was incorporated into a wing of the Harbor View Hotel in Edgartown. 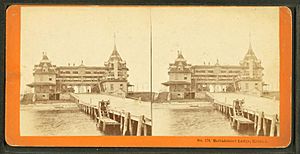 This shows a photo of the Mattakesset Lodge, the terminus of the Martha's Vineyard Railroad, in the late 19th century

Components of the Third Army, later led to fame by General George Patton in the sweep across France and the Battle of the Bulge, practiced amphibious landings at Katama during the summer of 1943 prior to shipping to England in December, 1943 as a part of the force being prepared for the D-day landings. 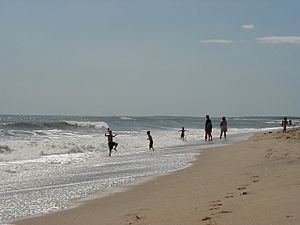 South Beach at Katama, Edgartown, MA. This is an open ocean beach with waves that range from docile to large and dangerous. 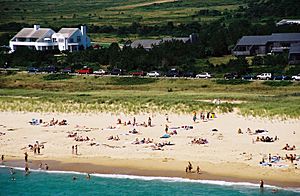 Aerial view of South Beach at Katama in 1998. 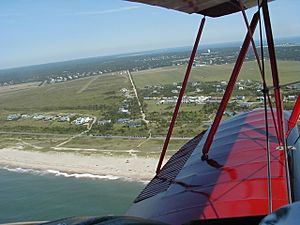 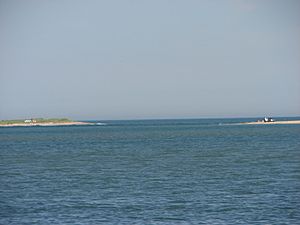 Photo of the "Katama Breach."

All content from Kiddle encyclopedia articles (including the article images and facts) can be freely used under Attribution-ShareAlike license, unless stated otherwise. Cite this article:
Katama Facts for Kids. Kiddle Encyclopedia.