Kate Seredy (November 10, 1899 – March 7, 1975) was a Hungarian-born writer and illustrator of children's books. She won the Newbery Medal once, the Newbery Honor twice, the Caldecott Honor once, and Lewis Carroll Shelf Award. Most of her books were written in English, which was not her first language. Seredy seems to be unknown (and untranslated) in her native Hungary, despite the fact that her story of the Good Master, and the sequel set in World War I are intensely about Hungary.

Kate Seredy was born November 10, 1899 in Budapest, Hungary. She was the only child of a schoolteacher, Louis Peter Seredy, and his wife, Anna Ireny. Seredy received a diploma to teach art from the Academy of Arts in Budapest. During World War I Seredy traveled to Paris and worked as a combat nurse. After the war she illustrated several books in Hungary.

In 1922 Seredy moved from Budapest to the United States. She studied English language, working as an illustrator and artist to support herself, while preparing to illustrate children's books. From 1933 to 1934 Seredy owned a children's bookstore. Though the store wasn't a success, she later credited it with helping her to understand children and what made a good children's book. In 1935 Seredy met May Massee, the children's editor at Viking Press. Massee didn't have any illustration work for Seredy, but encouraged her to write about her childhood in Hungary, promising to publish the book for Christmas. After several months of work, Seredy submitted what would become The Good Master, which she also illustrated. Though not auto-biographical, Seredy did spend her summers as a child on the plains of Hungary. She used many of her impressions and experiences in the story about young Kate, who is sent by her widowed father from Budapest to the country to live with her Uncle and his family. The Good Master was named a Newbery Honor book in 1935, a runner-up to Caddie Woodlawn, which Seredy illustrated for Simon and Schuster. In addition she designed the jacket and endpapers for Young Walter Scott, which was another Newbery runner-up that year.

In 1936 Seredy wrote and illustrated Listening, set in rural New Jersey. That same year she purchased, "Listening Hill", a one-hundred acre farm near Montgomery, New York. It was here that she wrote The White Stag, an historical retelling of legends of Huns settling Hungary. Seredy learned these stories from her father when she was a child. This book, which she also illustrated, won the Newbery Award in 1938. In 1959 it received the Lewis Carroll Shelf Award.

The Singing Tree appeared in 1939. A sequel to The Good Master, it tells of the effects of World War I on Kate and all of her family. The book shows the terrible effects of war upon ordinary people, especially those who are forced to leave their lands and homes to fight. The Singing Tree was also named a Newbery Honor book. Seredy continued to write and illustrate her own books as well as those of other writers. In 1945 she illustrated The Christmas Anna Angel by Ruth Sawyer. When the Caldecott Honor list was created in 1971, Seredy was retroactively named an Honor winner for those illustrations.

Seredy had twelve children's books published, but she considered herself an illustrator before an author. She had a unique style, primarily based on drawing, and considered her books "an excuse for making pictures". Her last book, Lazy Tinka, is dedicated to her long-time editor, May Massee.

Kate Seredy died March 7, 1975, in Middletown, New York, at the age of 75. Her papers and illustrations are held at the May Massee Collection at Emporia State University, Emporia, Kansas, and the University of Oregon Library. 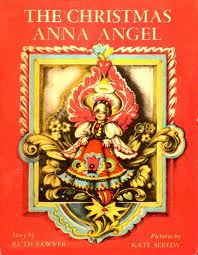 All content from Kiddle encyclopedia articles (including the article images and facts) can be freely used under Attribution-ShareAlike license, unless stated otherwise. Cite this article:
Kate Seredy Facts for Kids. Kiddle Encyclopedia.