Katherine Marie Helmond (July 5, 1929 – February 23, 2019) was an American film, theater, and television actress and director. Over her five decades of television acting, she was known for her starring role as ditzy matriarch Jessica Tate on the ABC prime time soap opera sitcom Soap (1977–1981) and her co-starring role as feisty mother Mona Robinson on Who's the Boss? (1984–1992). She also played Doris Sherman on Coach and Lois Whelan, the mother of Debra Barone on Everybody Loves Raymond. She also appeared as a guest on several talk and variety shows.

Helmond had supporting roles in films such as Alfred Hitchcock's Family Plot (1976) and Terry Gilliam's Brazil (1985). She also voiced Lizzie in the three Cars films by Disney/Pixar. 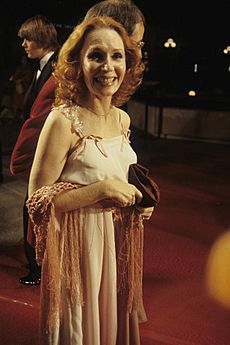 In 1957, Helmond married George N. Martin. After their divorce she married her second husband, David Christian, in 1962, and they remained married until her death, residing in Los Angeles, New York City, Long Island and London. She and her husband had a history as students of Zen.

Helmond died February 23, 2019, from complications of Alzheimer's disease at her home in Los Angeles. Her death was announced a week later.

All content from Kiddle encyclopedia articles (including the article images and facts) can be freely used under Attribution-ShareAlike license, unless stated otherwise. Cite this article:
Katherine Helmond Facts for Kids. Kiddle Encyclopedia.