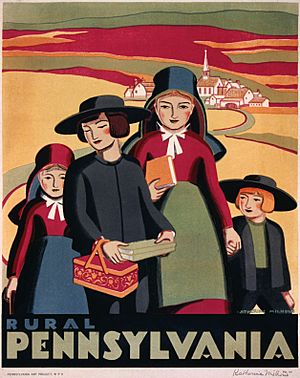 This is a poster made by Katherine Milhous. The exact year it was made is not known, but it was made around the year 1938.

Katherine Milhous (November 27, 1894 - December 5, 1977) was an American artist, illustrator and author. She wrote and made the art for the book The Egg Tree. In 1951, the book won the Caldecott Medal for best illustrations. Milhous mainly wrote children's books.

Katherine Milhous was born November 27, 1894 in Philadelphia, Pennsylvania. Her parents were named Osborn and Katherine Daly Milhous. They were Quakers and printmakers. The family moved to Pitman, New Jersey when Milhous was a little girl. A lot of Quakers lived in Pitman so the family wanted to move to be close to them. Milhous moved back to Philadelphia. She went to school at the Pennsylvania Academy of the Fine Arts and the Pennsylvania Museum of Industrial Art. She made art for magazines to pay for school. She also traveled outside of the United States with a fellowship she was given.

Milhous worked for the Federal Art Project in Philadelphia from the year 1935 until she stopped in 1940. She made a lot of posters to advertise the state of Pennsylvania. A lot of the art showed people and things from the Pennsylvania Dutch community. Milhous met Alice Dalgliesh and the two women would write books together. Milhous would make the art for the books. Milhous went to work for Charles Scribner's & Sons where Dalgliesh worked. Milhous started to write and make art for her own books, too.

She died in Philadelphia in the year 1977. The University of Minnesota and the Free Library of Philadelphia own her archives.

All content from Kiddle encyclopedia articles (including the article images and facts) can be freely used under Attribution-ShareAlike license, unless stated otherwise. Cite this article:
Katherine Milhous Facts for Kids. Kiddle Encyclopedia.