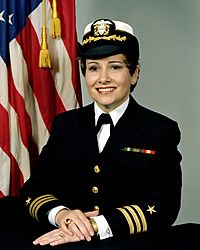 Kathleen M. Bruyere (née Donahue, previously Byerly; 5 February 1944 – 3 September 2020) was an American military captain in the United States Navy. She was one of the twelve women named by Time magazine as Time Person of the Year in 1975.

In May 1975, she became the first female officer in the Navy to became the flag secretary to an admiral commanding an operational staff.

Byerly was born in Norfolk, Virginia. She died of cancer on 3 September 2020 in San Diego, California at the age of 76.

All content from Kiddle encyclopedia articles (including the article images and facts) can be freely used under Attribution-ShareAlike license, unless stated otherwise. Cite this article:
Kathleen Byerly Facts for Kids. Kiddle Encyclopedia.