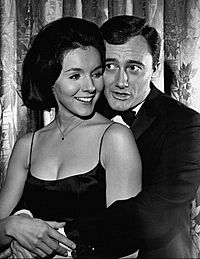 Kathryn Hays (born July 26, 1933) is an American actress. She is best known for her role as Kim Hughes on the CBS soap opera, As the World Turns from 1972 to 2010. He was born in Princeton, Illinois and grew up in Joliet. Her career was mainly active at sitcoms during the 1960s and 1970s.

All content from Kiddle encyclopedia articles (including the article images and facts) can be freely used under Attribution-ShareAlike license, unless stated otherwise. Cite this article:
Kathryn Hays Facts for Kids. Kiddle Encyclopedia.