Kaufdorf is a municipality in the Bern-Mittelland administrative district in the canton of Bern in Switzerland. 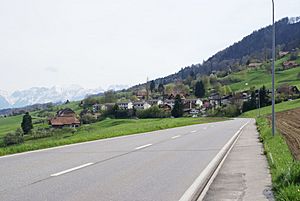 Kaufdorf is first mentioned in 1148 as Cuffedorf. The village of Kaufdorf first appears in a record in 1319 when it was part of the Herrschaft of Burgistein. It was acquired by the vom Stein family and then in 1386 by the Spilmann family. They eventually donated the village to the Inselspital monastery in Bern. When Bern adopted the new faith of the Protestant Reformation in 1528, the monastery was secularized and the city acquired Kaufdorf.

Between 1855 and 1911 a series of projects helped drain the marshy land along the Gürbe river and opened up new farm land. In 1901 the Gürbetal railroad (now part of the BLS) built a station in Kaufdorf. The railroad opened up the village and allowed businesses to move in and residents to commute out. Beginning in the 1970s the new neighborhoods of Trümlere and Rohrmatt were built for the growing population of commuters. 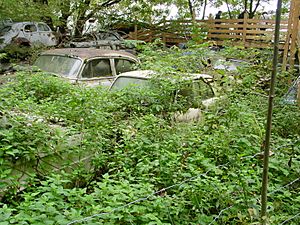 Around 1933, a Kaufdorf resident, Walter Messerli, began collecting cars for parts. Once usable parts were stripped from vehicles, he stored the empty shells on his land and allowed the forest to grow around them. By the 1970s, when he retired, there were several hundred rusting automobile bodies on his lot. His son took over the yard and continued adding vehicles. Eventually, about 1000 automobiles and 400 motorcycles occupied the yard. In 2008 a Swiss court ordered the vehicles removed and by 2009 most had been auctioned off, sold or removed and scrapped.

All content from Kiddle encyclopedia articles (including the article images and facts) can be freely used under Attribution-ShareAlike license, unless stated otherwise. Cite this article:
Kaufdorf Facts for Kids. Kiddle Encyclopedia.