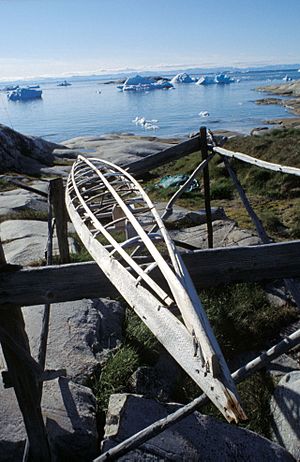 Structure of an Inuit kayak

A kayak is a small boat that is driven by manpower. It typically has a covered deck, and a cockpit covered by a spraydeck. It is propelled by a double-bladed paddle by a sitting paddler. The kayak was used by the native Ainu, Inuit, Aleut and Eskimo hunters in sub-Arctic regions of northeastern Asia, North America and Greenland. Modern kayaks come in a wide variety of designs and materials for specialized purposes.

Kayaks typically are built for one, two or occasionally three paddlers who sit facing forward in one or more cockpits below the deck of the boat. The spray skirt or similar waterproof garment attaches securely to the edges of the cockpit, so that no water from waves or spray may enter the boat. Therefore, in most styles the boat can roll upright again without it filling with water or ejecting the paddler.

Kayaks differ distinctly in design and history from canoes, which are craft propelled by single-bladed paddles by a kneeling paddler, although some modern canoes may be difficult for a non-expert to distinguish from a kayak. Kayaks are often called canoes in Great Britain and Ireland.

All content from Kiddle encyclopedia articles (including the article images and facts) can be freely used under Attribution-ShareAlike license, unless stated otherwise. Cite this article:
Kayak Facts for Kids. Kiddle Encyclopedia.