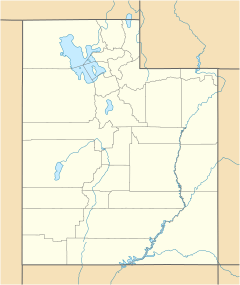 The town began as a mining camp. Its first name was Camp Florence, for the first "lady" to visit the camp. It became a Pony Express station and a center for the area's mining and lumber industries. As it grew into a town, it was renamed for Jack Keetley, a Pony Express rider and local mining supervisor.

During World War II Keetley was used as a 'voluntary' relocation camp for many Japanese-Americans. Fred Isamu Wada approached the mayor of Keetley, George Fisher, with the idea of leasing the land with the promise of bringing Japanese farm labor. While initial reaction was unfavorable, the fears were quickly allayed as it was shown that those relocating were not going to be a burden on the locals.

A large, 150-acre (61 ha) farm was established after much intense labor to clear the land of the ubiquitous rocks. While the women and children tended to chickens, pigs, and goats, the men went to work farming sugar beets.

The settlement lasted until the end of World War II when two-thirds returned to their homes in California and the rest scattered to other communities in Utah.

Because of its proximity to Park City and the Jordanelle Reservoir, while the site of Keetley itself is now completely submerged by the reservoir, the surrounding area is today the site of new construction, bringing in large resort-style home developments such as Hideout Canyon, Todd Hollow and Deer Mountain. In 2008 the town of Hideout was incorporated in this area.

All content from Kiddle encyclopedia articles (including the article images and facts) can be freely used under Attribution-ShareAlike license, unless stated otherwise. Cite this article:
Keetley, Utah Facts for Kids. Kiddle Encyclopedia.