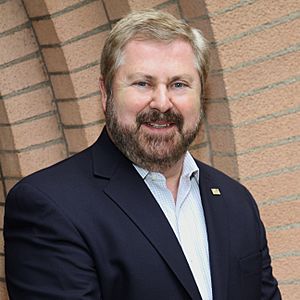 Kelvin J. A. Davies is the James E. Birren Chair of Gerontology at the USC Davis School of Gerontology with a joint appointment in Dana and David Dornsife College of Letters, Arts and Sciences in biology. He is involved in researching free radical biology, oxidative stress, and aging; and was an early member of the study of protein oxidation, proteolysis, and altered gene expression during stress-adaptation; he also found the role of free radicals in mitochondrial adaptation to exercise, and demonstrated the role of diminished oxidative stress-adaptive gene expression in aging.

Educated at the University of London, the University of Wisconsin, and the University of California at Berkeley, he was previously a faculty member at Harvard University and Harvard Medical School. Before moving to USC's Andrus Gerontology Center in 1996, Davies was Chairman of the Department of Biochemistry & Molecular Biology at the Albany Medical College, where he was also professor of Molecular Medicine.

Davies' research focuses on the genes that repair oxidatively damaged proteins, lipids, RNA, and DNA, and his laboratory has made notable contributions to the understanding of this subject over the past twenty years. Davies is currently focusing his research on the regulation of oxidative stress repair genes during aging.

In 2012, by order of French president Nicolas Sarkozy, Davies was awarded a French knighthood when he and fellow USC professor Enrique Cadenas, M.D., Ph.D. were named chevaliers of l'Ordre National du Mérite.

All content from Kiddle encyclopedia articles (including the article images and facts) can be freely used under Attribution-ShareAlike license, unless stated otherwise. Cite this article:
Kelvin Davies Facts for Kids. Kiddle Encyclopedia.