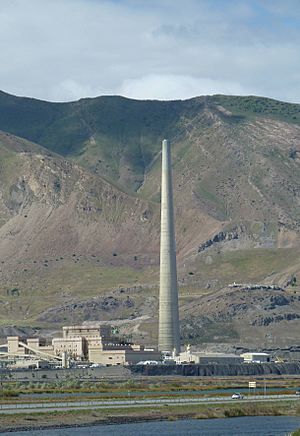 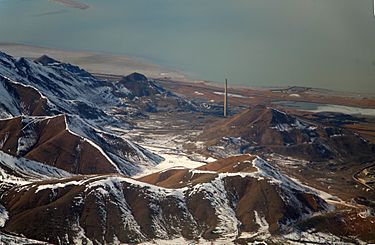 Aerial view of 1215-foot tall Garfield Smelter Stack, the north end of the Oquirrh Mountains and the Great Salt Lake, 2016

The Garfield Smelter Stack was completed in 1974, replacing several earlier smokestacks, the tallest of which was 413 feet (126 m) high. The extra height was needed to meet the requirements of the Clean Air Act of 1970, to disperse waste gases according to new standards.

In response to new emissions limits and anticipated future state and federal standards, Outokumpu and Kennecott had conducted flash converting pilot tests from 1985 at Outokumpu's research facility in Finland. With the introduction of strict new environmental regulations in the state of Utah, the smelter's maximum permissible sulphur emission was decreased to 1,082 short tons (982 t) per year from the earlier 18,574 short tons (16,850 t). In 1995 a new, cleaner flash smelting furnace was commissioned. By 2004, the annual average SO2 emissions from the stack were 161.5 lb/h (73 kg/h), below the permitted average annual level of 211 lb/h (96 kg/h) (with a three-hour permitted SO2 limit of 552 lb/h (250 kg/h)).

The off-gases from the flash smelting furnace contain 35-40% sulfur dioxide. They are cooled and cleaned in a waste-heat boiler, electrostatic precipitator and scrubbing system before being sent to the sulfuric acid plant. The acid plant produces either 94% or 98% sulfuric acid with tail gas containing typically 50-70 ppm sulfur dioxide, resulting in a measured sulfur fixation of greater than 99.9%. In 2006 the company produced and sold approximately 833,000 short tons (756,000 t) of sulfuric acid, made from the formerly released gas. The acid recovery plant is designed to also recover waste heat from the process to produce electrical power. Approximately 24 MW of electrical power is generated, representing 70% of the smelter’s electrical requirements.

The top can be accessed by a Swedish-built elevator that crawls up a gear track on the inside surface. It takes 20 minutes to ascend the stack, although workers only need to travel up to the 300-foot level each day, to service the air-sampling station.

All content from Kiddle encyclopedia articles (including the article images and facts) can be freely used under Attribution-ShareAlike license, unless stated otherwise. Cite this article:
Kennecott Garfield Smelter Stack Facts for Kids. Kiddle Encyclopedia.