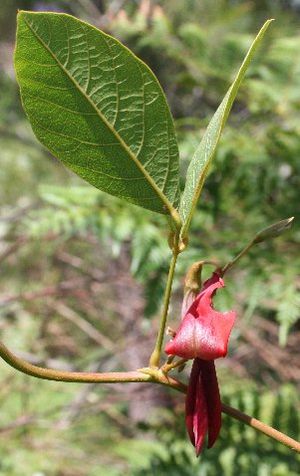 Kennedia is a genus of plants comprising 16 species, all native to Australia. They are evergreen climbing plants with woody stems. They usually have trifoliate leaves and pea-type flowers of various colours from pink to dark red and yellow to black. The genus was named by Étienne Pierre Ventenat after John Kennedy, a partner in the renowned firm of nurserymen, Lee and Kennedy of Hammersmith, London.

The genus name is sometimes spelled Kennedya, but Kennedia is correct.

This genus has 15 recognised species and one provisional species. 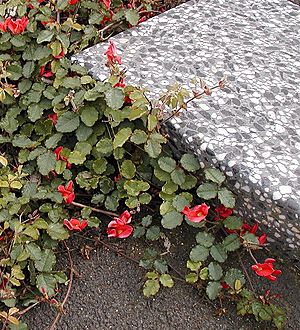 Kennedias are frost-tolerant with a preference for light, well-drained soil in full sun. Once established they will spread into shaded areas. Western Australian species are heat-tolerant and make good covers for sheds, fences and walls with support. Many kennedias are vigorous climbers; K. rubicunda (commonly used in revegetation projects around Sydney, where it is indigenous) and K. nigricans can cover up to five metres of wall from tube in nine months. The most popular species in cultivation, K. prostrata, is a much less vigorous groundcover plant.

They are propagated from seed during spring; in the warmer summer months they are easily propagated from cuttings. This robust genus can be heavily cut back after flowering to prevent invasive growth.

All content from Kiddle encyclopedia articles (including the article images and facts) can be freely used under Attribution-ShareAlike license, unless stated otherwise. Cite this article:
Kennedia Facts for Kids. Kiddle Encyclopedia.