Events of the Kennin era 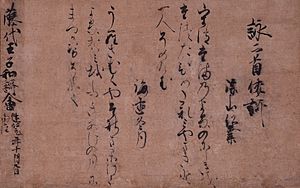 One of three Kumano poems (熊野懐紙code: ja is deprecated , Kumano kaishi) written by Emperor Go-Daigo on a pilgrimage to Kumano in the 1st year of Kennin

All content from Kiddle encyclopedia articles (including the article images and facts) can be freely used under Attribution-ShareAlike license, unless stated otherwise. Cite this article:
Kennin Facts for Kids. Kiddle Encyclopedia.