The Kentucky Historical Society (KHS) was originally established in 1836 as a private organization. The KHS is an agency of the Kentucky state government that "collects, preserves, conserves, interprets and shares information, memories and materials from Kentucky's past to assist those interested in exploring and preserving that heritage". The KHS history campus, located in downtown Frankfort, Kentucky, includes the Thomas D. Clark Center for Kentucky History, the Old State Capitol, and the Kentucky Military History Museum at the State Arsenal. 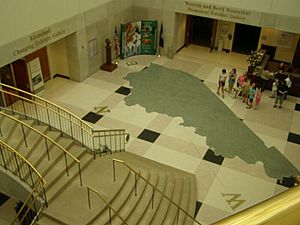 Lobby of the Thomas D. Clark Center for Kentucky History

The Thomas D. Clark Center for Kentucky History is the headquarters for the KHS. A multimillion-dollar museum and research facility, the center features both permanent and temporary exhibitions, a research library and a gift shop.

The center contains an exhibition called "A Kentucky Journey" that covers the period from prehistoric times to the present. At the Martin F. Schmidt Research Library, a genealogical and historical research library, researchers can access books, manuscripts, graphic collections and oral histories documenting the people and places of Kentucky's rich past. Families and historians can trace back genealogies and consult with professional staff. The center also contains the Keeneland Changing Exhibits Gallery for various temporary exhibitions – some examples of which include "Beyond the Log Cabin: Kentucky's Abraham Lincoln" and "Made to be Played: Traditional Art of Kentucky Luthiers." The gift shop is called the Steward Home School 1792 Store.

The Old State Capitol, a National Historic Landmark, served as Kentucky's capital from 1830 to 1910. Exhibits at the Capitol include the feature "A Kentucky Journey," the politics and daily life of the 19th century. The galleries of the Old State Capitol display the evolution of decorative styles in an exhibition entitled "Great Revivals: Kentucky Decorative Arts Treasures". The exhibit "Kentucky Hall of Governors" describes how the Kentucky governors handled or mishandled problems of the time. The life of "George M. Chinn" is shown as an innovative, problem solver, a self-taught expert in the knowledge of fire arms and mechanical weaponry.

Built in 1850, the State Arsenal contains the Kentucky Military History Museum, which illustrates military history using personal stories and artifacts. A fortress-like building that overlooks downtown Frankfort, the State Arsenal was recently renovated. The museum is a member of the Army Museum System.

Members of the public can purchase memberships to the KHS; these memberships support the efforts of the KHS and give members the benefit of free admission to the KHS history campus and reduced admission prices to KHS events and programs.

The KHS produces the Register of the Kentucky Historical Society which has been published continuously since 1903 and continues to provide fresh perspectives on the history and people of Kentucky. The Register includes the work of leading scholars on the commonwealth while being widely accessible to general readers.

The KHS is home to the major digital humanities project, the Civil War Governors of Kentucky Digital Documentary Edition (CWGK). Funded in part by the National Endowment for the Humanities and the National Historical Publications and Records Commission, the CWGK is a "freely-accessible online collection of historical documents associated with the chief executives of the state, 1860–1865" that seeks to reconstruct "the lost lives and voices of tens of thousands of Kentuckians who interacted with the office of the governor during the war years" through some 40,000 related documents. After an early access version was published, the work of the CWGK was celebrated in a June 2017 symposium that featured a keynote by renowned historian and digital humanist Edward L. Ayers. Later that same year, in August 2017, the CWGK's annotation tech was featured at the international Digital Humanities 2017 conference in Montreal, Canada.

The KHS has a variety of facilities available for rent, including the Commonwealth Hall, some conference rooms and the Cralle-Day Garden.

All content from Kiddle encyclopedia articles (including the article images and facts) can be freely used under Attribution-ShareAlike license, unless stated otherwise. Cite this article:
Kentucky Historical Society Facts for Kids. Kiddle Encyclopedia.