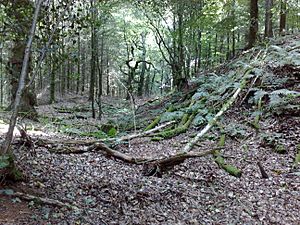 Kenwalch's Castle is probably an Iron Age hill fort that may have been converted into a Roman fortress, near Penselwood, Somerset, England, 6.6 kilometres (4 mi) east south east of Bruton at . It is a Scheduled Ancient Monument. It is believed to be named after Cenwalh of Wessex.

The site straddles the modern border between Somerset and Wiltshire, and is within Castle Wood which covers its defences and interior. The latter has an area of 1.6 hectares (4.0 acres). There is a single rampart and ditch which are well preserved in places. The earthwork bank is up to 2 metres (6 ft 7 in) high and accompanied by a 2 metres (6 ft 7 in) ditch in places. The road north from Penselwood village crosses the hill fort and probably passes through the original entrances.

It is believed to be the site of the Battle of Peonnum.

All content from Kiddle encyclopedia articles (including the article images and facts) can be freely used under Attribution-ShareAlike license, unless stated otherwise. Cite this article:
Kenwalch's Castle Facts for Kids. Kiddle Encyclopedia.